As the blog title suggests, I'm not adverse to including a little science fiction in my definition of science.  It's a fuzzy boundary, especially when either discipline is done well, and as we know from chaotic systems like the Mandelbrot set, the fuzzy boundaries are the interesting bits... 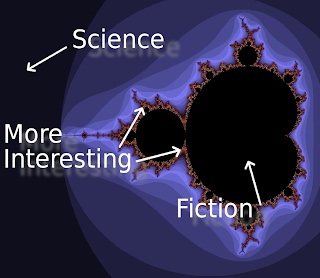 And buried in there somewhere is the reason I'm a terrible sci-fi snob.  Sorry, but there's a side of me who always pretended to be Spock rather than Kirk when we played Star Trek, and he insists on the proper science thing.  Snobs like me make distinctions between sci-fi genres, and the only real, pure form to a geek of my sensitivities is "Hard" sci-fi.  Not soft csi-fi, not space opera, not fantasy, and definitely nothing whatsoever involving Dan Brown.
It's all terribly precious and highly strung.
In most definitions of hard sci-fi any semi-magical futuristic events have to have a proper explanation according to the scientific thought at the time, or at least have a good stab at it.  That's where Star Trek, in my opinion, falls into the space opera category.  If you're going to base a faster than light drive on Einstein's model of spacetime then please have the decency to respect the other 60% of the theory and deal with the time dilation effects.  Honestly, it's not only lazy, it's all a bit 1920s isn't it?
Sorry.  Like I said, it's an emotional issue.
The point is, the best science always involves an element of really good science fiction, and vice versa.  This is my pick of some great science fiction, roughly married to a good book for background reading....

First off, a superb collection of short stories which has had a huge impact on modern robotics.  Asimov's stories contain some beautiful characters in the Shakespearian tradition - the tragic genius Susan Calvin, the Red Dwarf-esq comedy duo of Powell and Donovan.  The over-arching theme is an exploration of the ethical and practical issues brought up by semi or fully sentient robots.  There are psychological thrillers, logical mind games worthy of Sherlock Holmes and enough shaggy dog stories to get you barred from every pub in a large town.
The lasting legacy of this collection is more technical though, "Asimov's Three Laws Of Robotics".  This isn't the place to go in to depth about them, but just search online and you'll find arguments about how many there actually are, ways around them, suggestions for alterations and too much else besides.  That's the legacy, something that still causes heated argument decades later.  My pick for backround reading fairly swiftly dismisses Asimov's laws as unsuited to modern robotics, but acknowledges them thus:

...they are elegant in their simplicity and have served a useful fictional purpose by bringing to light a whole range of issues surrounding robot ethics and rights... Firstly, I owe Ronald Arkin an apology.  I supported a rival of his in the recent Diagram Prize, but this was a close second in my head, honest.  It's a standard stock item at work and gets a special place on my "cool engineering" shelf.  It's not strictly an engineering title, it's one of those ones that's kind of difficult to categorise.  Part abstract programming, part ethics discussion, and part social study, Arkin's book explores the implications of giving (mostly) military technology the ability to carry out potentially lethal attacks without a human finger directly on the trigger, such as automated air defence systems or airborne drones like the Predator.  An ironic "what could possibly go wrong?" is a standard initial reaction for most people (myself included) when lethal robots are suggested, after all, we've all seen the Terminator series...but it's slightly more complicated than that.  There are umpteen accounts of humans mistakenly firing on their own side, or on civilian targets, so human error is clearly still a big issue in warfare.  Are robots any more or less likely to make the same mistakes?  Are the programmers likely to make equivalent mistakes?  This is a fascinating plain-language look at a very sci-fi topic, but grounded in very solid modern computing and engineering principles.

Don't worry about which order you read them in, Baxter doesn't really work like that. Both books are very similar in many ways - they're both set around the same central characters with the wonderfully cantankerous Reid Malenfant and flawed genius Cornelius Taine taking centre stage.  They're both about much the same thing too; a planet Earth in our near future finding an alien artefact that allows light-speed travel, and Malenfant's cobbled together semi-amateur space mission to reach them.  Think of them as happening in parallel universes.
They're twins in many ways, both looking at the same thing from a different angle, and that thing is what's missing from far too many pieces of sci-fi - Relativity.  Space deals with the ability to travel through space at the speed of light, for example visiting a nearby star for a few hours and returning to find that decades have passed on Earth.  Time does much the same, but with the ability to travel forward through time.  Both are essentially an aspect of the same thing, spacetime travel, and reading both books will give you a heady sense of just how weird the internal workings of our universe are.  There are wonderfully un-human aliens, some thoughtful explorations of the Fermi Paradox,  intelligent squid and huge leaps through both space and time that make geology look like a fleeting snapshot.  This is Hard sci-fi at its best, real, proper physics with a cracking storyline and imagination behind it.
Science
Stannard Russell
Relativity: A Very Short Introduction 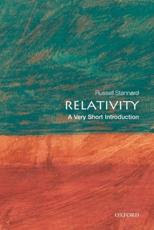 You either "get" Relativity or you don't.  For those who do, there's a plethora of textbooks, papers and the like, but believe it or not there's a bit of a dearth of introductory books that aren't school textbooks.  Oxford University Press's Very Short Introductions to the rescue!
This entire series of books are written by leading experts in their fields and squarely aimed at the layman.  You can't escape a few equations when dealing with spacetime, and this pocket sized title doesn't shy away from them, but the explanations are clear enough and the pace slow enough to allow the reader to keep up with what is essentially high school maths.  Relativity is a concept that can be tricky to grasp at first, simply because it flies in the face of everyday experience, but persevere with a good introduction like this and the stars will never look quite the same again.

Anyone who thinks that sci-fi fans are a bunch of fantasists with a tenuous grip on reality should go and see Charlie Stross speak at the earliest opportunity.  He's an exceptionally smart man with some well thought out views on everything from politics to the economy, all from a sci-fi author's unique point of view.  Accelerando is a novel that almost defines the meaning of "future shock", the feeling that the world is developing a little faster than you can keep up with.  The plot is most succinctly summed up by an exponential graph, and one that equally well describes Moore's Law at that.  From a near-present view of an all-present internet the novel accelerates towards sentient business entities and the conversion of human "meat-space" into an entirely computational world.  It's utterly mind-boggling at times, with even the central characters being swept away by an approaching wave of self-made obsolescence.
Science
Ray Kurzweil
The Singularity Is Near 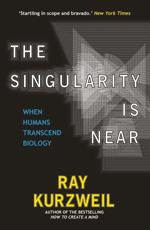 This book is always going to cause arguments.  Should it be under a "Science" heading?  Possibly not.  It's full of personal opinion and unsupported conjecture, it rambles a little and there are some obvious and very personal arguments going on somewhere in the background.  It's somewhere in the fuzzy bit of the diagram at the top of this article, borderline science and borderline sci-fi..
Still, it's fascinating.  Our capacity for computing as a species has accelerated exponentially over the last few decades (some would argue million years), and that exponential growth is heading towards infinity...mathematically at least.  As somebody in his early thirties I'm amazed by the progress from a Commodore 64 and a 12 baud modem to today's systems with data rates and quantities being orders of magnitude higher.  Where on earth will we be in another twenty years?  Or forty?  Or a hundred?  Kurzweil's book looks at where the graphs are going and what it might mean for humanity.  It's a big "might"...many prominent futurists, scientists and sci-fi authors utterly failed to predict the rise of the internet and the associated social implications, even from as late as the early nineties, and Kurzweil might be equally off the mark with his predictions, but it's nice to know people are at least attempting to deal with the future before it's here.

Geoff
Previously a science buyer for a UK bookseller, I'm now running my own web design and support business from a small cottage in the middle of the Scottish Highlands. I'm a general geek and enjoy tinkering with linux based systems, php/mysql, python and perl. I'm also into kitesports, climbing, physics (particularly quantum theory, cosmology, multiverse theories and the history-of), science fiction and cooking to various degrees of success. I don't do facebook, but you can find me on Twitter as @_TheGeoff